Samsung released a video showing off a foldable phone and a tablet hybrid back in 2013 that took the internet by storm. It was the first time that the idea of a foldable phone or a tab was pitched in the market. The phone goes by the name of Samsung Galaxy X by the critics so far.
The company is now all set to officially start working its way towards its launch. Sources tell that we can expect the launch sometime later this year. In an interview to CNBC, Dj Koh insinuated at the San Francisco Samsung Developer Conference happening in November as the event where the phone might be unveiled for the very first time.
This sure is the era where technology dominates so it is no surprise that a foldable phone is on its way. But we still are confused rather out of ideas as to how this concept will be achieved. Let’s just move on to what we know so far nonetheless.

Samsung plans to make only a limited number of Galaxy X. The phone is not targeted at the masses and will be strategically released in the market. Since Korea is the home to the company, it is expected that the phone will definitely hit the Korean market.

It will be a smartphone and a tablet hybrid that, as rumors have it, will have a screen like Galaxy 5 and display like Note 7. Further, the device may also be 4K. From the day Samsung first unveiled about its future foldable project, numerous what-to-expect theories have circulated proposing solid designs. A report by Bloomberg stated that Samsung is working on another foldable device. Later in 2014, an official teaser introduced ‘‘flexible OLED display phone and tab concept’’.
What is still a mystery is its size. Whether it is going to be a phone that folds into a palm-size or will be mainstream tablet huge, no one knows. The tech critics have made their bids nonetheless. By far, the more plausible one states that the screen will be in the 5in-5.5in ballpark.
Another leak suggests that the screen will be without bezels just as Galaxy 9 for a seamless one-screen look. A lot of design patents have also made it to the public eye previously. One of the initial ones proposed a 7.3-inch OLED display that folded into a clamshell-shaped phone. 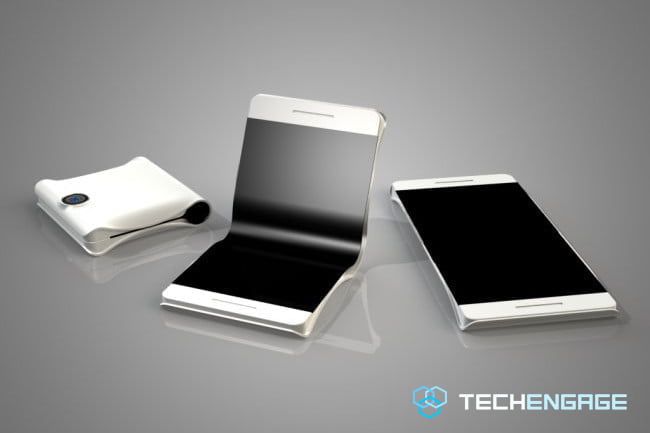 The Price and release

Given the out of the box idea, the technology that will be used to create it won’t come at a cheap price.  So we can expect a hefty price tag on the phone. According to a recent report by Golden Bridge Investment, the price is predicted to be $1,850.
The Korean firm itself stated that the foldable phone will be launched later this year. As we talked about it earlier, we will have the first glance at the actual phone at Samsung’s Developer Conference happening in San Francisco this November.

What do we think!

Big screen phones with minimal bezels may look edgy but when it comes to the ease of carrying them, you have to agree that it gets on your nerves. How amazing will it be to enjoy a fine OLED display screen phone that folds in your pocket?
Samsung has been working on the dual OLED screen displays for quite some time and says that ‘’it’s time to launch’’ now. The phone is under great speculation and the competitors have already started working on their own foldable phones. Among them, LG and Lenovo are rumored to have followed the lead.
All eyes on the Samsung Developer Conference 2018!