WhatsApp is the most popular instant messaging app in the world, with users exceeding 1.5 billion. The app is popular due to its easy-to-use interface and secure end-to-end encryption.

The application lets the user do more than just sending and receiving messages. Now it supports audio and video calling features along with WhatsApp Status, which resembles the story feature on other social media apps like Facebook and Instagram.

Everyone enjoys WhatsApp, but it is still limited in some ways. For example, what if you have a dual SIM smartphone and you want to have two WhatsApp accounts on the same phone?

You can use only one number at a time. WhatsApp doesn’t allow its users to install multiple accounts, which limits users who are using WhatsApp in dual SIM phones.

How to run double WhatsApp on Android phone

There are several ways you can start using dual WhatsApp apps on an Android phone.

From Android Lollipop onwards, the Android OS supports multiple users. One can add users to the system and keep the data separate. Almost all Android phones have this feature. A new user can install apps and maintain their information independently.

To do this, create a new user profile on Android and install WhatsApp there separately with a new number and profile. After setting up the user profile, you can run parallel apps on your Android.

How to create a user profile on Android

Now, you have two WhatsApp accounts in one single phone without rooting or using any third-party applications.

Remember, you can only add a phone number that is not already running on another account or phone. WhatsApp doesn’t let users run the same account on multiple devices. So, you can install two WhatsApp accounts on one phone, but you can’t run both on the same phone number.

If it’s too inconvenient to switch user profiles to open messages and use multiple WhatsApp accounts on your Android phone, I will recommend using the next method which is using cloning apps on Android.

Cloning apps are not new to Android phones. Many users create clones of apps to keep their personal and work lives separate. However, to clone an Android app and use it on your phone demands a third-party app.

With these third-party apps, a user can clone any app and run multiple accounts without any trouble. You can have multiple WhatsApp, Messenger, Facebook, Twitter, Skype, Instagram, Snapchat and many other accounts on your phone.

Here’s a list of third-party cloning apps you can try:

In case you are wondering, you don’t have to root your Android phone to use these Android cloning apps. Almost all of them are free and don’t require any root permissions. What’s interesting is that you can also use multiple game accounts on the same phone with these cloning apps. If your phone is full of apps and you can’t install more, then read our guide on how to free up space on an Android device. 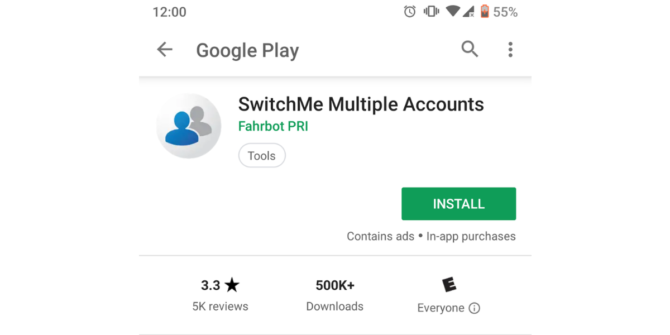 Now we have talked about a non-rooted method, let’s talk about an app that works only on rooted phones. To run two separate WhatsApp accounts on an Android phone, SwitchMe works perfectly. However, this application is only for users with root access. Here are the steps:

Bingo! You are now using the SwitchMe app for double WhatsApp accounts.

You might be wondering why we have to root to install this app. SwitchMe allows you to log in and sign out of multiple user spaces with root access. Unlike the multi-user feature that is built into Android phones, this app lets you do that in one space. You can run dual WhatsApp accounts on a single smartphone and the paid version lets you run even more WhatsApp accounts in one phone.

These are all the possible methods to run dual WhatsApp accounts on your Android phone. For users who are looking for a multiple WhatsApp web method, there is no way we know of to run multiple WhatsApps on one browser, since it works on QR verification. However, if you have multiple browsers installed on your personal computer, you can verify it on both browsers with different accounts.

If you have any question related to this guide, ask in the comments below!

Share this guide with your friends who want to run more than one WhatsApp account on the same Android!