Microsoft is struggling to withstand the pressure of Tech industry instead of promising a future. 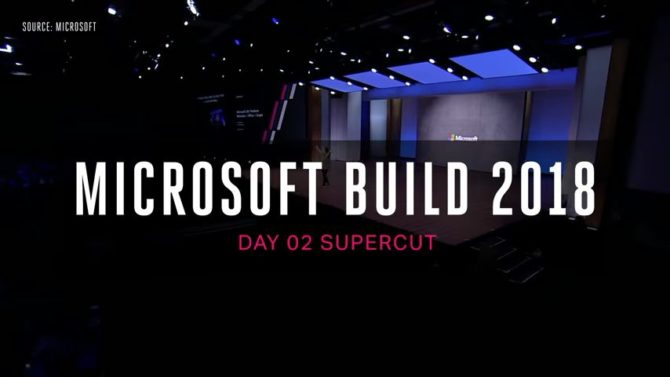 For anyone who’s following the tech industry for past two decades, Microsoft Windows being sidelined by Microsoft and not taken pride in makes you raise the voice. The summary of Microsoft’s Build conference can be presented in the following words,

Windows will stay.” Unsurprisingly, the name of Windows was mentioned multiple times in the conference but awfully, it wasn’t to discuss any progress in the existing versions of the Windows but to refer to either some “Windows developer” or to discuss the progress of some other gadget around “Windows.

A monopolistic software like Windows that powers the PCs of 90% of the world is not expected to be mentioned as low profile as this. Does this refer that we have become the worshippers of AI alone? Apparently, you, me and larger chunk of the population, no more worries about the operating systems in our gadgets. The mere mention of Windows speaks to this fact that all we care about is AI and web today.

Nadella ensures that Windows will stay. Is this a relief?

Microsoft’s operations are going through big shifts since Nadella’s rise as a CEO in 2014. It was indeed a very different company a few years before. The progress of Microsoft isn’t an afterthought but the company has started operating on the model of IBM than its competitor software giant Apple.

Is Microsoft heading to a world without Windows? Nadella’s recent statements ring many bells. He recently explained his buzzwordy idea for the future of the company in terms of intelligent cloud, AI, and Edge.

We built operating systems all our life, but what is an operating system? In a world where every person is going to use multiple devices in their life, they’re going to collaborate with many people in their family or at work. (Satya Nadella)

Windows isn’t going anywhere but the latest features in the new Window 10 show extreme pragmatism. The new Windows 10 include a timeline that works across multiple devices. It also features “Your Phone” that lets you access phone data using the desktop. These features are no awe for the users of cloud computing. The aggressive emphasis on “Cortana” has limited the innovation that Microsoft brought up in past few months.

Microsoft’s energies are being invested elsewhere

The shift can be clearly seen by the demos that Microsoft planned to show onstage at its Build developer conference. Microsoft’s “Batcave” is situated in the building where Nadella and other Microsoft executives work and it’s a clear imagery of Microsoft’s future plans. It is a room that is crammed with drones, laptops, cables and immensely expensive Surface Hub displays. The place is used for the test and trials of new tech products before they are shown onstage and are eventually sent to retail consumers.

Some glimpses of future innovations

The company is hinting major changes ahead. It has integrated Cortana into Slack and Cortana can be invited into chats where it suggests replies based on the conversations being held. The demo of the futuristic meeting showed the guests being greeted by a 360-degrees camera-com-speaker. Moreover, the conversation was also being transcribed as it was uttered. Microsoft claims that the speaker can translate between multiple languages live and can follow up on the conversation with the correct person if/when needed. 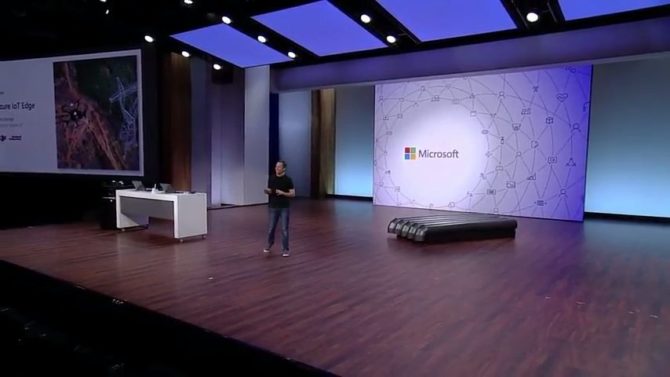 HoloLens also showed up in the conference. Microsoft is digging into ways to make this headset better by integrating 3D visualization to another level. The screen showed that a person using HoloLens can see 3D map of a building’s temperature sensors live.

In another demo, a DJI drone was shown to pass through an oil pipeline and recognize faults in it without requiring connectivity to the internet. The other part is even interesting because an off-the-shelf consumer drone can stream video to a Windows laptop to show this. The idea is that Windows is important, but it’s not the only thing. Things work better with Windows being geared up around to augment the upcoming technology. 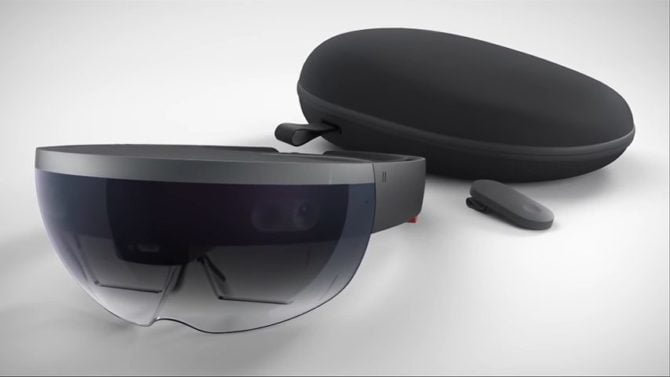 Light at the end of the tunnel

It’s important to keep in mind what type of company Microsoft is. Microsoft’s backbone had been Windows and the Office productivity software that runs on it. The company dominated the PC industry a few decades ago and everybody spoke of its monopoly. All previous efforts were tied to Windows but now things seem to be working a little differently.

The demonstrations showed that Microsoft is doing ‘something’ although it isn’t investing energies in Windows. The demo was just an amalgamation of a few Microsoft products working together is a shocking manner. Hence, the idea of taking over everything as presented by Nadella was no way near. Microsoft isn’t promising a very innovative future but it ensures to improve and build on the good stuff it already has.