Google Assistant is getting a complete design overhaul ahead of Google’s Pixel 3 launch event. The assistant now gets more visual and powerful on eyes with the updated version. Users can now easily interact with their fingers and feast their eyes with the most important content.
Pixel 2 users can squeeze the sides of their phones or hold the home button and experience the revamped assistant, others can just follow their device’s specific way of launching Google Assistant. The icons for Explore and Upcoming have been tweaked and the voice bubbles now feature on the upper-left corner. Sliding up takes you to updates and query history. The update also brings Google Now elements to assistant like showing events and calendar, commute and schedules, available with just upward swipe away. 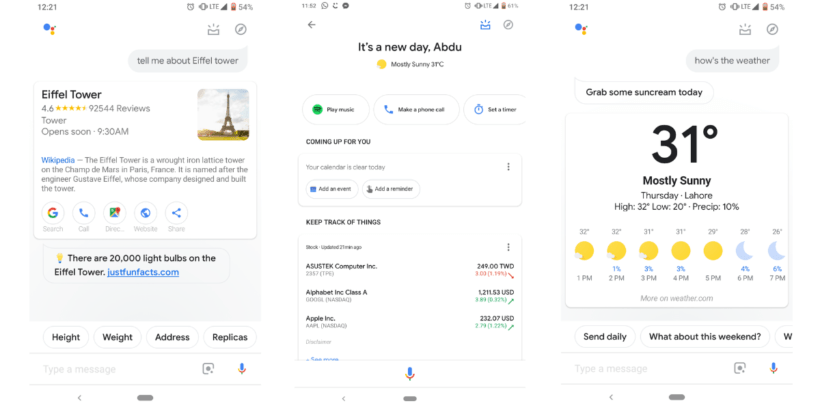 Google is also launching “Rich responses” for developers, allowing them to extend Assistant actions inside their apps. These set of tools will let developers integrate assistant in their apps for better interaction.
Google also acknowledges that chatbots were a bad idea and with the new design they are embracing interactive graphics and granular control of touch. Their seamless voice philosophy seems to be dying and hence they are bringing touch controls back. The annual Pixel hardware event is scheduled for October 9.
There’s a new speculation that with the new Assistant redesign Google is planning to bring new smart displays to life in their hardware event this month. The company is also gearing for a flurry of hardware devices release on October 9 event. Along with Pixel 3 and Pixel 3 XL, devices like Chrome OS-based tablet, a Pixel Stand wireless charger and new Chromecast is also on cards.
Whatever the case is, the new assistant design is rolling out to Android devices and will be available for iOS as soon it gets through Apple’s app store process. The update makes sense for those who are investing in the smart displays, smart homes, and smart speakers. It offers manual controls to choosing the actions on these smart devices.
Let us know what you think in the comments section below!