The day has come. Samsung’s Galaxy S20 series, along with Galaxy Z Flip, will launch in few hours. The Galaxy smartphones have already been leaked along with the Samsung’s take on a foldable flip phone, the Galaxy Z Flip. Here is everything we know so far:

Galaxy Z Flip is the company’s new foldable smartphone after Galaxy Fold. The new phone will have a different folding pattern following the footsteps of Motorola Razr. Galaxy Z Flip name was also revealed on their official website and the phone was unveiled in an Ad played during the Oscars 2020. Samsung isn’t secretive like Apple and spills all the beans before time. Here’s the Oscars Ad of Galaxy Z Flip.

Samsung’s Galaxy Z Flip is reportedly having a large 6.7-inches hole-punch foldable display which flips like a clamshell. The phone will also get flagship specs like Snapdragon 855+ processor, 8GB of RAM, and a 3,300mAh battery, though the SD 855+ is kinda outdated since the arrival of SD 865.. The clamshell phone was first teased at SDC 2019 saying that the company is exploring different form factors of the foldable devices.

The clamshell smartphone has dual rear cameras of 12-megapixel resolution and a front-facing selfie camera. Samsung Galaxy Z Flip is rumored to get a price tag of $1,500 and two colors, Black and Purple.

Samsung is jumping from Galaxy S11 to straight S20. Probably because it’s 2020, or maybe because 20 is bigger than 11? We are leaving it for Samsung officials to explain on stage.

Speaking of the numbers, Samsung will announce three Galaxy S series smartphones this year. Unlike last year, when Galaxy S10, S10 Plus, S10 5G, and S10e were announced, Samsung is sticking with just three phones, S20, S20 Plus, and a premium S20 Ultra model which will be replacing Galaxy S20 5G.

As the name suggests, the Ultra will have everything that the Plus and regular S20 has and a little more. Because of the previously announced Galaxy Note10 Lite and Galaxy S10 Lite, we won’t be seeing a budget S20e model this year.

Galaxy S20 leaks are already out, suggesting a lot of new in the box. 8K 30fps is reportedly coming to the Galaxy S20 series along with 5G compatibility. Not only this, but the front-facing cameras will also get 4K recording. S20 and S20 Plus will feature a 12MP+64MP+12MP main, telephoto, and ultra-wide camera sensors, while the Ultra model will get 108MP main and 48MP telephoto lens.

The smartphones are performance powerhouse according to the leaks. The Exynos 990/Snapdragon 865 (depending on the region) and 8/12GB of RAM, these phones are top of the chain.

With great power comes great responsibility…of battery management. In order to manage all this power, a device needs a powerful battery as well. The Galaxy S20 is reportedly getting 4,000mAh battery, while S20 Plus and S20 Ultra will get 4,500mAh and 5,000mAh, respectively. Hopefully, it won’t turn into a debacle like Galaxy Note 7.

The new Galaxy phones will run Samsung’s One UI 2.0 on top of Android 10. 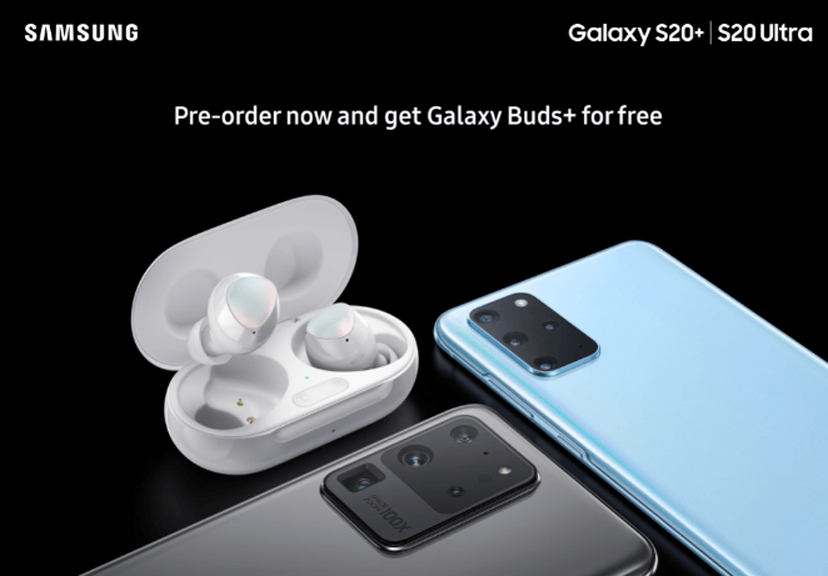 Leaked by @evleaks, Galaxy Buds+ will be the truly wireless earbuds from Samsung that will be available for free on pre-ordering any of these new Galaxy flagship phones. There’s also a rumor of the expected announcement of Galaxy Home Mini. It’s about time.

So, these were the expected products from the Unpacked 2020. Stay tuned for more updates on the latest flagship phones.