Huawei is bringing some crazy ideas with Mate 20 Pro

Huawei held an event in London to announce their new flagship series along with other announcements. The Mate 20 Pro comes as a successor to P20 Pro as a shiny new piece of tech in the event. P20 Pro is the most excellent camera smartphone with the highest DxOMark score yet. With excellent build quality and top-notch camera, P20 Pro is the incredible phone of this year. Generally, glass backs in phones are impractical but with P20 Pro, we are willing to make a compromise because of how exquisite it looks. To top it all, the blue color compliments the glass back the most.
Now, Huawei could’ve just stopped with the P20 Pro and waited for the next year to introduce their next flagship phone, but they didn’t. Huawei Mate 20 Pro is another contender from Huawei which will probably dethrone P20 Pro from DxoMark ranking, but we have to wait for the official results.

The Chinese tech giant learned a lot from P20 Pro and tried to add it all in the new flagship phone. Mate 20 Pro takes everything from the previous flagship with new features like Under screen fingerprint scanner and an absolutely bonkers feature, “Reverse Charging” for other phones. Yes, the phone comes with this neat trick of becoming a wireless charger for other phones. Mate 20 Pro is the first Huawei flagship phone that can be wirelessly charged. You are in a coffee shop, and your friend needs some juice in their phone, take a wireless charging enabled phone near the back of this phone and boom! Their phone is charging.
Let’s have a look at specs first: 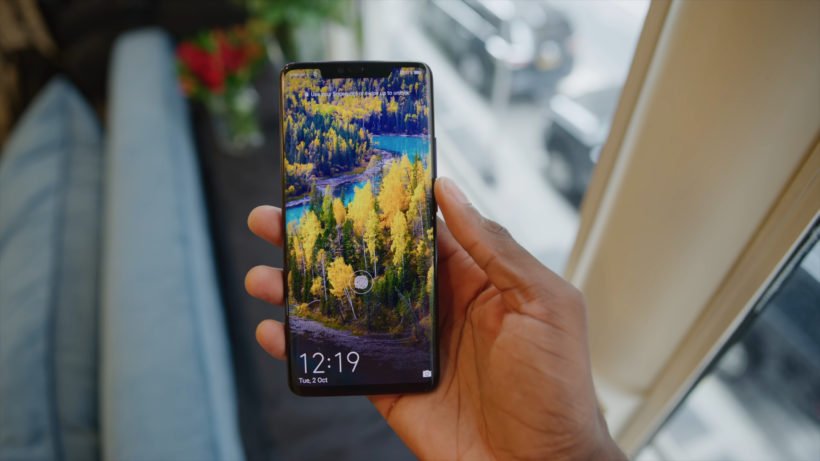 Let’s start with the design first. We all already knew about the design, thanks to leaks. Mate 20 Pro has the same iconic two-tone color back which looks stunning. The back glass is prone to fingerprints and is slippery, but you can always add a skin for maximum grip or a cover for maximum protection. The phone comes in five mesmerizing colors, Midnight Blue, Twilight, Emerald Green, Pink Gold, and Black. On the front, the screen stretches to the edges of the phone, and the bottom edge doesn’t have much of a chin.

Phones are not dull after Huawei’s Mate 20 Pro. 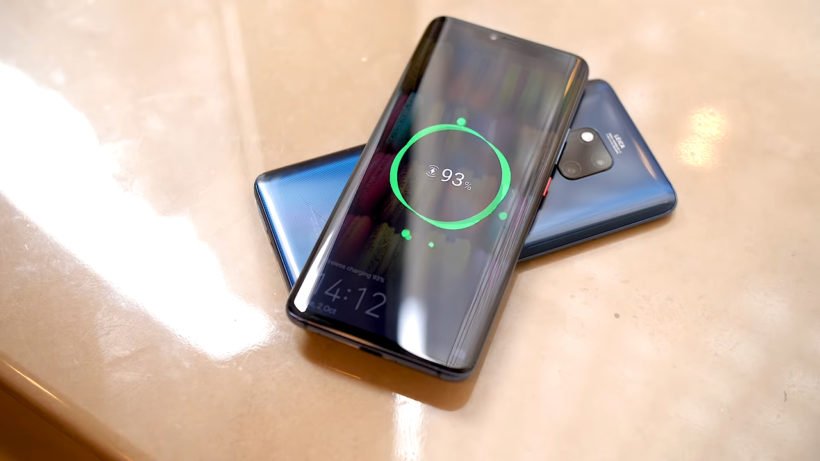 The phone boasts an impressive number of wild features like reverse wireless charging which we have never seen in a smartphone. Mate 20 Pro is Huawei’s first phone to support wireless charging. It’s crazy that they never thought of adding it in predecessor P20 Pro as it also has a glass back. Anyways, you can wirelessly charge your friend’s phone by just tapping backs and share the juice while sitting in the coffee shop. Isn’t that cool?

Let’s talk about Kirin processor. We knew that Kirin 980 was in the pipeline and it’s the first phone that is using a 7-nanometer processor architecture and is faster than 970. Huawei is also dedicated to make their phones an AI hub, and that’s what we are getting in this phone as well. The company claims that the new Kirin processor will outpace Apple’s A12 bionic chip. The new chip is said to be 75% faster than previous generations.

The battery in Huawei’s Mate 20 Pro is HUGE. It’s the first mainstream smartphone that is rocking a 4200 mAh battery with SuperCharge tech, and that’s insane. P20 Pro can fill 70 percent juice in 30 minutes which is even faster than Dash Charging previously said as “Fastest Charging” system. Huawei also clarified that their battery goes through one of the strictest safety testings in the industry. 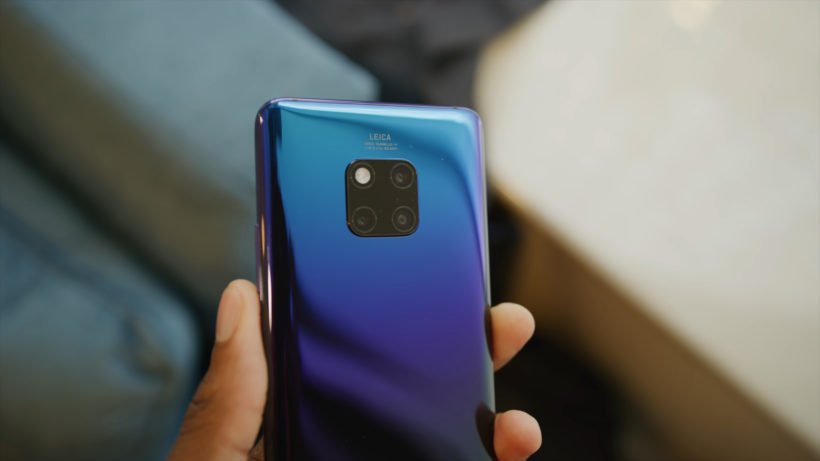 All of these neat tricks and wild features, but let’s talk about the star of the show, the camera. There are not two, but three Leica camera sensors on the back. Although we have seen four cameras in Samsung Galaxy A9, Huawei still takes the DxOMark throne with P20 Pro as the best camera smartphone till date. It seems like we are going to have a new contender that can dethrone P20 Pro after we get to see official results.
Huawei didn’t just swap the P20 Pro’s camera in the new phone and presented it to the audience. The monochrome sensor was changed with an ultra-wide-angle sensor, and it’s much more potent than any other triple camera phone. We welcome the change, and the phone shows terrific results in daylight as well as in different lightings.

The monochrome sensor lets user capture great low light photographs and putting it in P20 Pro was unnecessary given its primary sensor was already more significant than the rest. The ultra-wide angle, on the other hand, means that you have something that a photographer craves the most. It provides much more flexibility in photography and allows you to capture photos not possible on other phones.
The phone also uses more AI in the camera to sense the scenes and adapt the settings accordingly. There’s a ‘Master AI’ option in the camera settings that can recognize objects and capture photos. 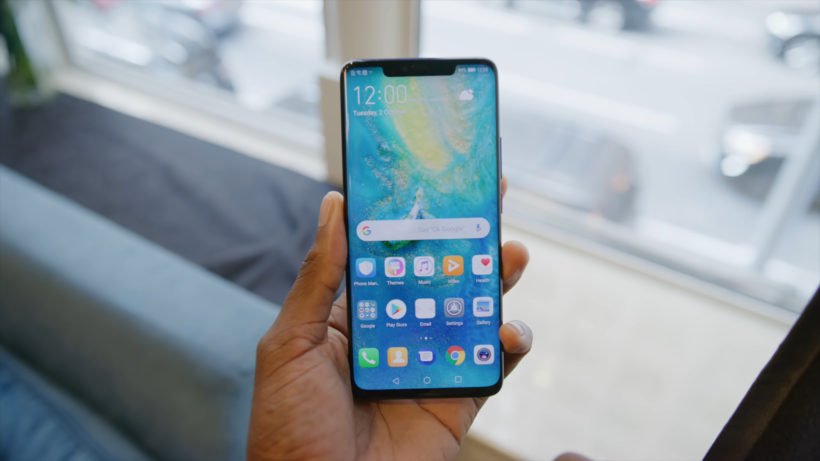 I’m not a fan of Huawei’s EMUI skin but Android Pie 9.0 running on top of EMUI in Mate 20 Pro feels smooth. The phone doesn’t lag just like the P20 Pro, but still, I don’t like it personally as I find Stock Android appealing in every way. However, with EMUI you get a lot of features, and it might be the best for many people who love custom skins.

With the new Mate 20 Pro, Huawei also introduced ‘Nano-memory cards.’ An invention by Huawei that is smaller than a microSD and fits in a Nano SIM tray. The Mate 20 Pro gets expandable storage for up to 256GB. That’s a lot of storage with 256 Gigs or 128Gigs of internal space. It also comes in 6GB and 8GB versions. So, no problem for gamers. 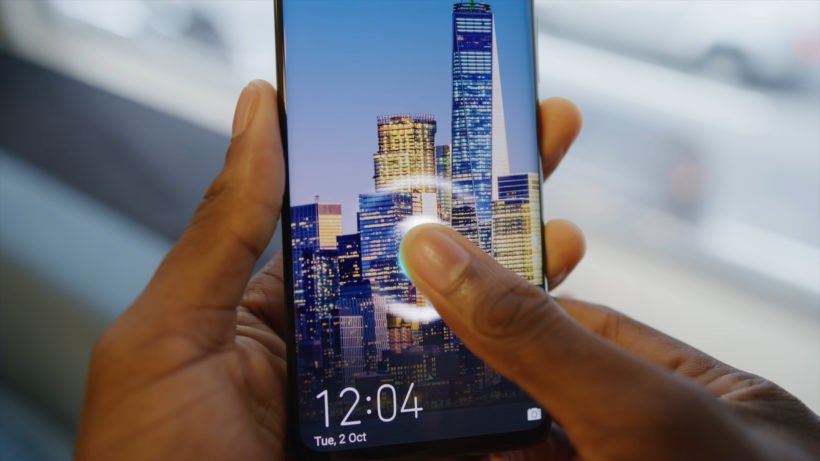 Because we have a notch, there’s a 3D facial unlock sensor on the front just like Apple’s Face ID feature. The sensor works surprisingly well. Another trick from Huawei in Mate 20 Pro is the under-screen fingerprint scanner. OnePlus is set to announce OnePlus 6T and was supposed to be the first mainstream flagship phone with this feature, although we have seen similar tech in Vivo phones.
Huawei pushed OnePlus aside by making sure that they have an under-screen fingerprint scanner in their phone. Mate 20 Pro gets a hidden fingerprint scanner while Mate 20 has one on the back. OnePlus already confirmed in teasers that they are bringing an under-screen fingerprint scanner in the new OnePlus 6T.
Huawei seems to be challenging every company and is winning the race of “we did it first.” But we have to remember that it’s doesn’t matter who did it first, the quality of the product is what matters the most. The under-screen sensor of Mate 20 Pro requires a little bit more pressure than standard sensors though it works fine. In-display sensor is quick, but we will have to wait till October 30th till OnePlus announces 6T for the comparison.

When it comes to the price, Mate20 Pro is expensive with a price tag of 1049 euros ($1215). The exciting tricks in Mate 20 Pro and the Galaxy Note 9’s price might justify this pricing.

Mate 20 Pro seems like a fresh breeze after disappointing hardware choices by Google in Pixel 3. All these wild features and neat tricks that are actually useful in one device makes it an ambitious phone in years. But companies should always prioritize quality over quantity. The headphone jack is gone, and it comes with 3.5mm headphone jack to USB adapter in case you are thinking about buying a new dongle. Overall, Mate 20 Pro seems fresh with all these features that are helpful.
Should you buy it? Well, it seems like a total upgrade if you have P20 Pro. There are new features; better display, 75% faster processor, new camera features and much more. So, it’s worth a shot.
What do you think about Mate 20 Pro and all these features?
Don’t forget to share your thoughts about it in the comments!