Although Playtime is a platform to showcase Android apps, consumers will also greatly benefit from the event. Consumers will get an insight on what new features, apps and games they can expect in the near future.

According to Google’s analysis, with every 6 MB added to an app’s size, its chance of being installed drops by 1 percent. This is known as app install conversion rate.
This percentage might not seem like a lot, but can be quite significant based on how much space the app takes.

Also Read: How to free up space on Android device

Google and app developers will be working hand in hand to develop space-efficient apps. Since APK file sizes keep increasing with each passing year, this is a high priority issue for Google.
Many smartphone manufacturers are ditching SD card slots on their devices and internal storage has become even more precious. We all know just how expensive internal storage can  be.
Depending on the smartphone, going from 64 GB to 128 GB can somehow increase the price from anywhere between $100 to $200. So, users who own a smartphone without expandable storage, smaller apps are a necessity.

Google is introducing a new app publishing feature called AppBundle. This will ensure Android apps are as small as possible.
App developers will upload their code to AppBundle as they would normally do, only this time Google Play will split the APK files into smaller chunks. All of these will have the same signing key as the original uploaded APK. 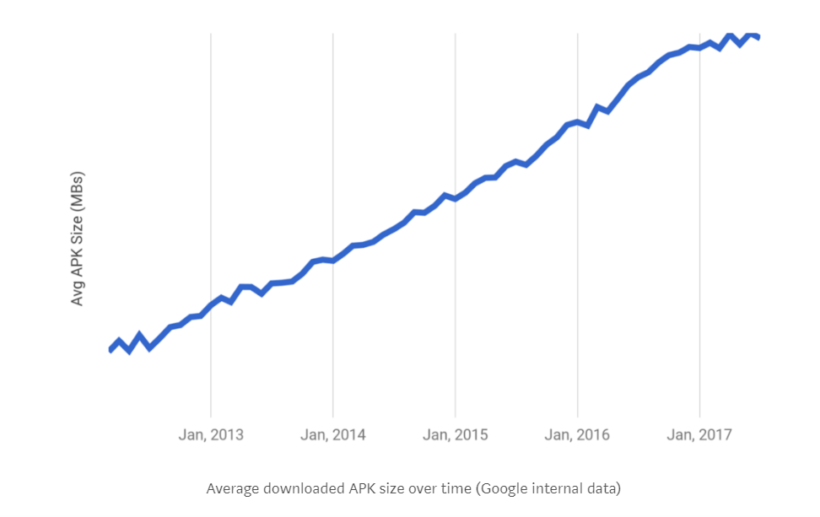 The signing key will be used to identify all the split APKs as part of the original APK file. By splitting the APK files, users will only get the APKs that are specific to their requirements.
For example, if a user has set their native language to English, they will not get the other languages. They will also get APKs specific to their smartphone’s screen resolution and CPU architecture etc.
And if the user wants to change his native language later on or wants to use the app on a different device, the user will get APKs specific to their update requirements.

AppBundle can significantly cut down downloading times and storage space of an app. Google is also making it easier to create instant apps. These apps allow users to test them out without having to download them.

Developers previously had to create separate versions of their apps for instant apps and normal version of their apps. Google now accepts a single app for both versions. This will ease a lot of pressure off of app developers’ shoulders.

Here are some other noteworthy announcements at Playtime: