Several Instagram users woke up on Wednesday to see a follower count much smaller than the day before. Users initially believed Instagram had deliberately shut down dummy accounts, but Instagram later confirmed that the losses were due to a bug. Instagram has been working to remedy the situation. The company said in a statement:

“We’re aware of an issue causing a change in account follower numbers for some people right now. We’re working quickly to fix this”.

“Update: we’re expecting to have this issue resolved by 9 a.m. PST tomorrow. We understand this is frustrating, and our team is hard at work to get things back to normal.”

As big names on Instagram lost followers overnight, several users speculated that Instagram was removing fake accounts as they had in the past. Fake accounts do not contribute much to the general landscape of the social media app but made up a bulk of the fan-made accounts that follow celebrities.

The number of followers is important to Instagram influencers since that dictates their ability to negotiate advertising contracts. Instagram has always had a problem with influencers buying followers. Because brands only pay people with high follower counts to advertise their goods, there is a constant incentive to increase followers.

A few days ago, Instagram sent out a notification to its users saying it recognized deceptive activity on their platform. It read:

Users had even been sharing their login information with apps that promised to increase their followers. Instagram made it clear that they would work to put an end to this. 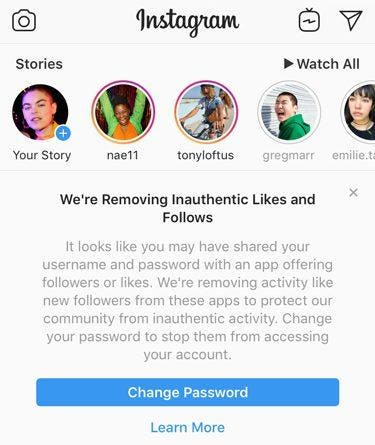 After this notification and Instagram’s promise to ensure authenticity on their platform a year ago, users concluded that Instagram had simply removed more fake users. While we now know it’s due to a bug, Instagram hasn’t been any more specific about the nature of the glitch.

We do know that the bug has caused many users to automatically unfollow accounts, so people are encouraged to check and see if accounts need to be refollowed.